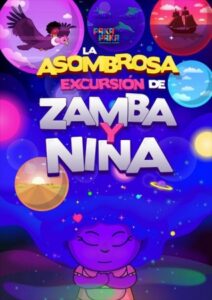 As a voice actor, one of the things that I adore about this profession is how we somehow end up doing characters that have something to say to us personally. Strangely, I often find myself doing a voice that has something to say to me. That’s when the professional overlaps with the personal, allowing me to grow but also breathe life into the character through my own experiences.

Of course, though we are often lucky enough to work with colleagues and clients with similar interests, it is also important to be ethical and coherent when deciding to lend our voices to an audiovisual piece.

This brings me to the story I want to share: the story of Zamba and Nina! It’s a show for children I fell in love with from the get-go. Like all children’s shows, it brought challenges and surprises, stories that left me thinking about how to be a better person. Children are an infinite source of curiosity and wisdom who can always help us evolve and grow.

In case you haven’t seen it, Zamba is an original animated production made in Argentina and watched by children across Latin America. In fact, not too long ago I discovered that Amelia—the daughter of Angela Baez, my dear colleague from the Dominican Republic—just loves the series! (This gives you an idea of the kind of messages Angela and I exchange: we talk about everything.)

The character whose voice I do is named Niña but in one very important episode, she decides she wants to go by NINA.

Nina is an African-American girl in the 19th century. She used to be called Niña (or girl) and never had a name of her one because she had been born to slaves.

So in this episode, “Zamba and Nina’s Amazing Journey,” this brave little girl discovers her history, removing the scarf that covers her hair. It turns out her father was a slave who was forced to separate from his family. Learning about her roots fills her with pride and emotion, making her want to understand history to be able to transform her future and that of other children as well.

I felt a rush of pride and emotion for other children like Nina as I was doing her voice. For me, this character represents all the girls and women unaware of their personal history, encouraged by this show to be curious and build a personal sense of belonging.

And as often happens with a project you do with love, with a feeling of social responsibility, others felt it too: the episode took the comKids PJIBA 2021 prize in the Fiction Ages 7-10 category.

That’s why I wanted to share this project with you. It’s hard to believe that even today, discrimination against minorities continues, not only in employment but at all levels of society. I believe it is our responsibility to chime in and fight against any form of race, ethnicity or gender oppression. This kind of violence takes many forms: advertising language, the news and audiovisual products are all fundamental to building awareness and setting an example for future generations.

If I’ve sparked your interest, check out these links to learn more about this project. Here’s to more Ninas of all ages discovering who they are!

See you on my next blog entry!